The Gorges du Verdon and the regional nature park 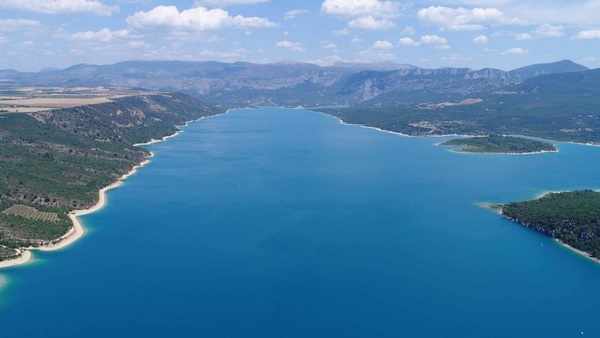 Introduction to the Verdon Gorges

This article presents the history and prehistory of the gorges du Verdon and the role of the regional nature park.

Presentation of the Verdon in a few figures

Before presenting the history and prehistory of the Gorges du Verdon, let’s start with a few figures.
What is its source? The Verdon rises at an altitude of 2819 meters, near the Allos Pass, in the three bishoprics massif. Where does it flow? Its is interrupted when it flows into the Durance, in the commune of Vinon sur Verdon.
How long is the Verdon? It covers about 175 kilometers. The Verdon serves as the border between the departments of Alpes-de-Haute-Provence and Var.
Why is Verdon green? The green color of the Verdon is due to the fluorite and microalgae it contains: it is probably at the origin of its name, formed from the Latin viridum, “green place”.

How many dams are there along the Verdon? Five dams. The first of the dams was built Castillon in 1948, followed by Chaudanne in 1952. Then in 1967 Gréoux’s dam followed by Quinson’s dam built during the year 1972.

Finally, the largest of all, with the creation of the Lake of St. Croix in 1974.

But what is the purpose of all these dams? They regulate the course of the Verdon to build up Provence’s water reserves. They also to ensure electricity production, mainly with the Sainte-Croix dam.
Where are the Gorges du Verdon? The Verdon Gorges consist of two parts: the Verdon Grand Canyon or the Verdon Grand Canyon, from Castellane to the Sainte -Croix Lake for more than 36 km. And the Lower Gorges du Verdon, which begins at the lake of Saint Croix, passing by Baudinard and Quinson and finally opening on the lake of Esparron.

What are the aquatic activities on the Verdon? From pedal boats to rafting, from windsurfing to canyoning, canoeing, kayaking, …

What are the cultural activities in the Verdon?
Museums, country houses, a gastronomic center and even a cinema with a giant screen.

History and prehistory of the Gorges du Verdon

Prehistory in the Verdon

Thanks to the Museum of Prehistory of the Gorges du Verdon in Quinson, you can discover the various populations that have inhabited these shores for thousands of years.

The first settled populations on the territory from 400,000 years ago before Christ. The many prehistoric caves that line the gorges of the Middle and Lower Verdon make this territory one of the most important places of prehistory.

During Antiquity, the Romans occupied the Verdon region, we can admire some prestigious places, especially in Riez la Romaine .
During the High Middle Ages, the region became part of the Franks’ kingdom and regained its independence in 879. Then in 880, the Saracens occupied the massive Maures until 976 when William the Liberator moved them back.

The Medieval period was marked by a recomposition of the fiefdoms and the monastic renewal. Cities are developing and trading marks a prosperous period for the region.

In the 15th century, a difficult period darkened the country in economic crises and black plague epidemics. Charles V, the religious wars and the unrest of the League, The territory was reinvested at the end of the 15th century and was severely affected by the conflict. The Catholic Jean de Ponteves, great seneschal, lord of Carces and Blieux, became Count of Provence in 1571 after his victory over Charles V.

Between the 17th and 18th centuries, the region experienced a boom in the local industry with population growth and strong village development. These were the first steps of the local industry: glassware, pottery, hydraulic installations … Under the reign of Louis XIV, Moustiers-Sainte-Marie became one of the largest faience centers in France. Do not miss the visit to a production workshop during your stay in Moustiers.

During the Enlightenment, several personalities criss-cross the region: Father Marc Bauduen, 17th century Capuchin speaker, Father Bausset, born in the same place, a famous philosopher of the 18th century, Father Pellas of Comps, author in 1723 of the first Provencal language dictionary and Father John of Aups.

But it is also a dark period in the history of Provence. In 1720, the great plague struck the territory and decimated its inhabitants.

The first explorer of the Verdon: Edouard Alfred Martel

The beginning of the 20th century was marked by the “discovery” of the Verdon Gorges. Geologist Edouard-Alfred Martel led the exploration in 1905. He is accompanied by a group of locals, led by Isidore Blanc, the teacher of the village of Rougon. The emblematic trail was renamed Blanc-Martel trail on his behalf. The movie Verdon Secret in 3D, introduces this wonderful story between abysses and rapids.

However, this discovery does not mean that the territory was uninhabited. Indeed, the gorges have been always crossed by men and today retain their imprint: hunters, gatherers boxwood, beekeepers, shepherds, foresters …
In the middle of the 20th century, the EDF (company of Electricité de France) development program allowed the building of five dams. Some villages were partly drawn (Aiguines, Bauduen, St. Croix, Saint-Julien-de-Verdon) and sometimes even the whole village disappeared under the water (Les Salles-sur-Verdon). This transformation of the landscape, where the inhabitants live, deeply marked memories, lifestyles, and hearts. At the end of 1970, the inauguration of the 35,000 hectare Canjuers military camp was a new symbol of the expropriation of the territory suffered by the inhabitants.

There was also the era of scientific research in the Verdon with the inauguration of the Cadarache nuclear studies center in 1963, followed in the 2000s by the project of construction of a prototype nuclear fusion reactor (ITER).

Verdon Gorges: a famous place in the history of Rockclimbing

The Verdon area is also famous for its landscape: Verdon is indeed the biggest and deepest canyon in Europe. You may have heard of Patrick Edlinger, one of the top rockclimbers who made the reputation of the cliff in the 80ies. Even now, the Verdon remains one of the famous spot for rockclimbing : we’ll dedicate a full blog article to this topic in the near future.

In order to manage the changes and mutations of the territory, the inhabitants of the Verdon have chosen to adapt and develop their activities. Thus, the Verdon Regional Natural Park was created on March 3, 1997. It is also a European ecological network that imposes constraints on the protection of landscapes, fauna, and flora.

The challenge is therefore to find the best balance between economic activities and the preservation of the various types of heritage. To this end, the Park has set itself 4 goals:

The Park’s constant work has been enabled and protected for the benefit of all. The Park team is currently working on the classification of the Verdon as one of the Grand Sites of France. This ranking is expected to be published in 2020. It includes the development of lookouts on the ridge road and around the gorges, better transport organization and the creation of car parks to facilitate tourist visits. It mainly provides for the improvement of signage, which is sometimes lacking on both roads and trails. 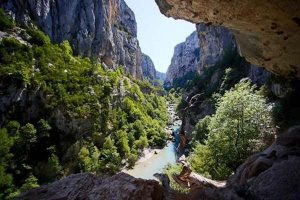 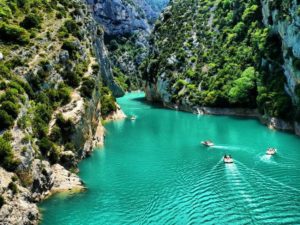 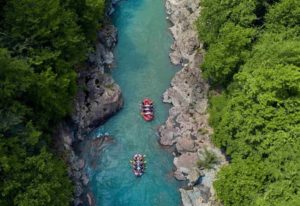 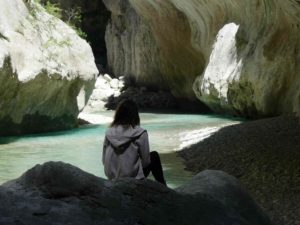