The guided tour of Moustiers-Sainte-Marie with Elsa 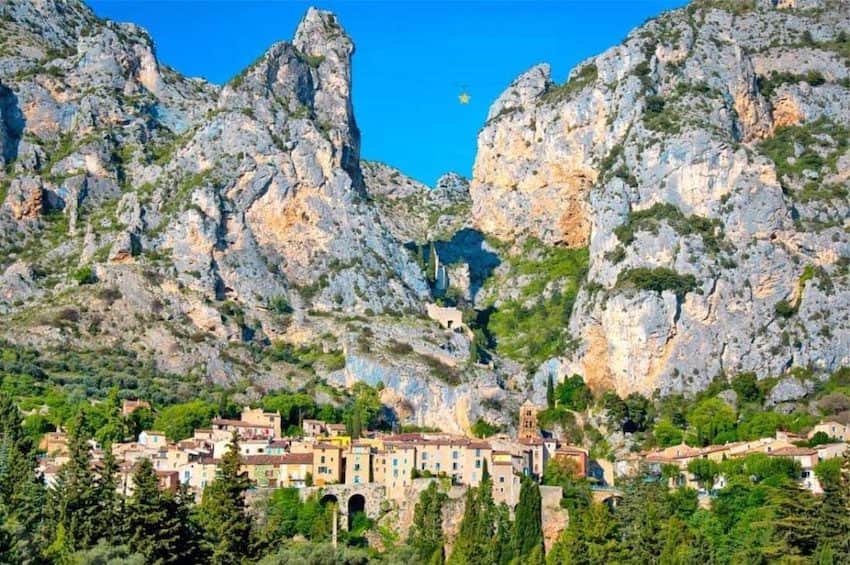 You may be wondering why take a guided tour of Moustiers-Sainte-Marie?

You might be on a tour in southern France. Maybe you went to visit L’Occitane en Provence? Let us tell you why you should head for the guided tour of Moustiers-Sainte-Marie. There, you’ll discover the real “Provence secrète”.

A village that, by its famous star, its church steeped in history, its rocks and its streets is reminiscent of a Provençal crib. Immerse yourself in its mazes and exploration during this guided tour and open the book of hidden secrets of our beautiful Provence.

A place of anecdotes and history, we put our guide in front of the tourist office of Moustiers and set off to discover the city for an hour and a half for this guided tour. Here is what we have learned from it.

We propose you to book online at the best price on our website or at the Moustiers Sainte-Marie shop :
– Rent an electric boat on the lake Sainte Croix
– Book a half-day excursion by minibus
– Réserver le tour du lac en vélo électrique
– Book an astronomy evening on the shores of lake Sainte Croix
– The guided tour of Moustiers-Sainte-Marie

You can see it on many dishes, the famous signature of Moustiers. But few know why this village is so famous in the field.

First of all, what is earthenware? This is a technique used in pottery, more precisely in ceramics, consisting in coating the paste with a lead or tin glaze. It takes its french name “Faïence” from the Italian city of Faenza, in which it was first made famous.

A little history during the guided tour

Moustiers faience became famous during the time of Louis XIV. Indeed, the Thirty Years’ War, in which Spain had already participated, had a cost. To finance it, the king made the decision, quite wise, to melt all of his silverware. But without crockery, it quickly becomes difficult to live properly – at least when you love beautiful things, and you are Louis XIV. It was at this moment that the Moustiers earthenware was recommended to our dear Sun King, who used it to refill all his cupboards!

The king’s court functioning a little like that of the schools, the nobles wanted to imitate Louis XIV and therefore began to buy, they too, Moustiers earthenware. One thing led to another, and at the end of the 17th century, the earthenware of our small village made a name for itself.

In 1870, unfortunately, new clay quarries were discovered, and the earthenware business suddenly collapsed. It was not until the 1920s and the arrival of Marcel Joannon, known as Marcel Provence, that the ovens were rekindled. This historian, poet and student of Frédéric Mistral decided to relaunch the production of earthenware in Moustiers during this period. It is also to this Aix-en-Provence scholar that we owe the famous Musée de la Faïence. 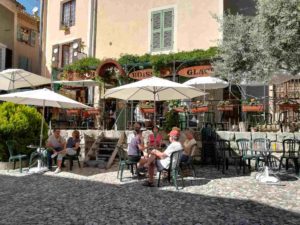 The rich history of Moustiers revealed in the guided tour.

It would be difficult – if not impossible – to tell the whole story of this village. But what better way to tell the story of a village than by biography of its buildings? First of all, his name. Moustiers comes from the Latin Monasterium, which simply means Monastery. The village is indeed surrounded by two priories. As for St. Mary, these words were added in 1847 as a symbolic reference to the Virgin Mary. It was in 1848 that the two names were added and Moustiers became Moustiers-Sainte-Marie.

As you head towards the village square and its famous church, you will come across a chapel. This is the Chapel of Saint Anne, built in the 16th century in the Paillerols district. Although the cemetery is nowadays attached to this so-called Chapel, it was once located in the central square of the village. (So under your feet)

In the 14th century, the cemetery’s mill was at the center of the local economy and allowed the village’s 2000 inhabitants to live. There were about ten such mills in Moustiers.
Until the time when earthenware was lost, many potteries and tanneries were active throughout the city. We can still see some today, but the majority of those still in operation were founded after Marcel Provence’s arrival.

Notre Dame of the Assumption and the dancing bell tower

It is the jewel of Moustiers.  This church, built in the 12th century, is as famous as its famous bell tower. Classified as a historical monument in 1913, it is the muse of several centuries of art and architecture. In the Lombard Romanesque style, which is the first Romanesque age, it is also one of the only moving bell towers in Europe. It simply means that the ringing of his bell made the whole building vibrate, earning him the nickname “Dancing Bell Tower”. It is the particular architecture of the church that has allowed it to stand upright and still does.  Indeed, in the 17th century, Jean de Bertet, the Prior of Moustiers, decided to reinforce the tower with beams inside and iron keys outside. But some legends say that, when one listens attentively, in absolute silence, the bell tower always vibrates.

The inside of the church

Let’s continue our guided tour and now enter this famous parish church. The nave will strike you, as its architecture is so reminiscent of that beautiful period that is the Provençal novel – just that. Built with five bays, each guarded by a barrel vault that reveals their curves, this church offers us a soft architecture.

As a generational shock

The choir brings character to the building. In 1336, the Prior Pierre de Pratis rebuilt it in Gothic style. The altar alone has a whole history. It is built from a sarcophagus long considered worthless, dating from the 5th century (the altar is therefore objectively older than the rest of the church). It is surrounded by two columns, each surmounted by a capital decorated with acanthus leaves. These are oak and fig leaves.
The colored stained glass window that can be seen in the chapel dates from the 19th century. It represents a sun with sixteen stripes (which recalls one of the theories about the village star) and was offered by the Blacas de Aups family.

Between the Romanesque and the Gothic

This building, therefore, presents itself as a representative of several styles, several periods, several generations. Between the Romanesque and the Gothic, it is a surprising and timeless building that is good to discover under the beautiful blue sky of Provence.

Guided tour of Moustiers-Sainte-Marie: What else can I see?

We cannot talk about the architectural heritage of Moustiers without mentioning the Notre-Dame de Beauvoir chapel. You will have to climb nearly 300 steps to reach this building enclosed in the rock. Once a Marian temple, this chapel was built in the 12th century, in the tradition of the parish church. Like many religious monuments in the Provençal region, the legends around this chapel abound and still feed the imagination of many dreamers today. It has also been classified as a historical monument since 1921. 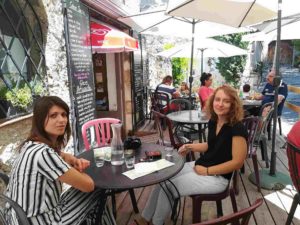 The legend of the star of Moustiers

Even if it is unique in its kind, there has not been in history only one star in Moustiers. Indeed, the one you can see hanging from a chain above the village made by Mr. Bourjac is not the original.
There is no explanation for the presence of this star above our heads today, but three main theories clash – among many others. The first engravings mentioning the star date from the 15th century!

Frédéric Mistral gives us the first one in his poem La cadeno de Moustié. He tells us the story of a lord of the Blacas family, who was taken prisoner in the 13th century. He would have prayed to the Blessed Virgin without respite, promising if he were released to stretch out a sixteen-streaked star above the village, the emblem of his family. Today, the star has only five and no one knows if it has ever really worn more.

Others see it as the result of impossible love between two young people from rival families. I am talking about Romeo and Juliet, the cursed lovers, the ones who should not have loved each other.

We can also mention the more down-to-earth version (although everything is relative). Moustiers being built in the middle of the rocks, the villagers would have erected this star by superstition. Indeed, this lucky star – in every sense of the word – could be the result of an unexpected wish against… Stone falls. We don’t know, these things can be very damaging.

I think we will never know the true story of this mythical star. But one thing is for sure, it has not finished feeding the imagination of many. Some see it as a religious sign, others as the result of an impossible love, or as a symbol of chivalrous hope. Many books on the subject have been disputing the truth for years. All are quite plausible and superbly found. But the best thing would be to come and write your own version of this story while admiring the Star of Moustiers.

The rest of the guided tour

You have to leave the square to admire the village washhouse. The latter was still used 15 years ago, as explained by a village woman who used to wash her clothes there. The washhouses were at the time gathering places, and it is easy to imagine the villagers meeting and chatting there.

On Pomey Square (name of a local mathematician) next to this wash house is a restaurant called Lou Roucas. It bears this name for the simple reason that a rock had fallen and crashed on it. (I hope the star was not erected against rock falls, it would be sad to know that it is useless).

Do not repeat it to anyone …

For those who want to discover a small corner of paradise lost, take the stone path leading to Riou. You will discover a splendid waterfall located to the west of the village. In spring, the latter flows into a natural swimming pool where it is pleasant to swim on a hot day. It is a little known place because it is certainly kept secret. It contributes to giving a little more mystery to this unique and grandiose village by the richness of its history.

Elsa must already be leaving us. The time during this guided tour has gone by too fast. All these Provençal stories call for others. Why not the history of the abandoned village of Chateauneuf Les Moustiers? Be patient! Be patient! It will be in a future article…

If you liked this article, then just have a look at the map. come and visit us!
You are welcome to visit us in our outdoor agency shop in Moustiers: we’ll be happy to share with you many tips for your stay.

PrevPreviousVinon-sur-Verdon, peace and quiet on the banks of the Verdon River
NextTrekking in the VerdonNext

Most outdoor activities in Verdon Gorges are now open This week, river rafting, electric bike, packraft, airboat, electric boats and canoeing…
To know more about our activities and book online, go to this page. We are back and reservations are open.
For any question regarding your reservation, please consult our FAQ or the “chat”. We’ll answer in a few hours (just return on our website to see your answer) 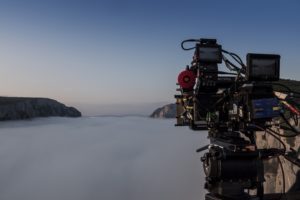